A search on iWeb corpus for 3 part subordinating conjunctions reveals the following frequency:

They point to another group of multiple overlapping points on the English Grammar Profile.

B2 point 91 in CLAUSES & conditional is defined as:

conditional subordinate clauses with a range of conjunctions ‘as long as’, ‘provided’  + present simple or present continuous, with future reference.

A quick way to check for examples of ‘as long as’ + future reference in iWeb is with a collocate search for ‘will’: 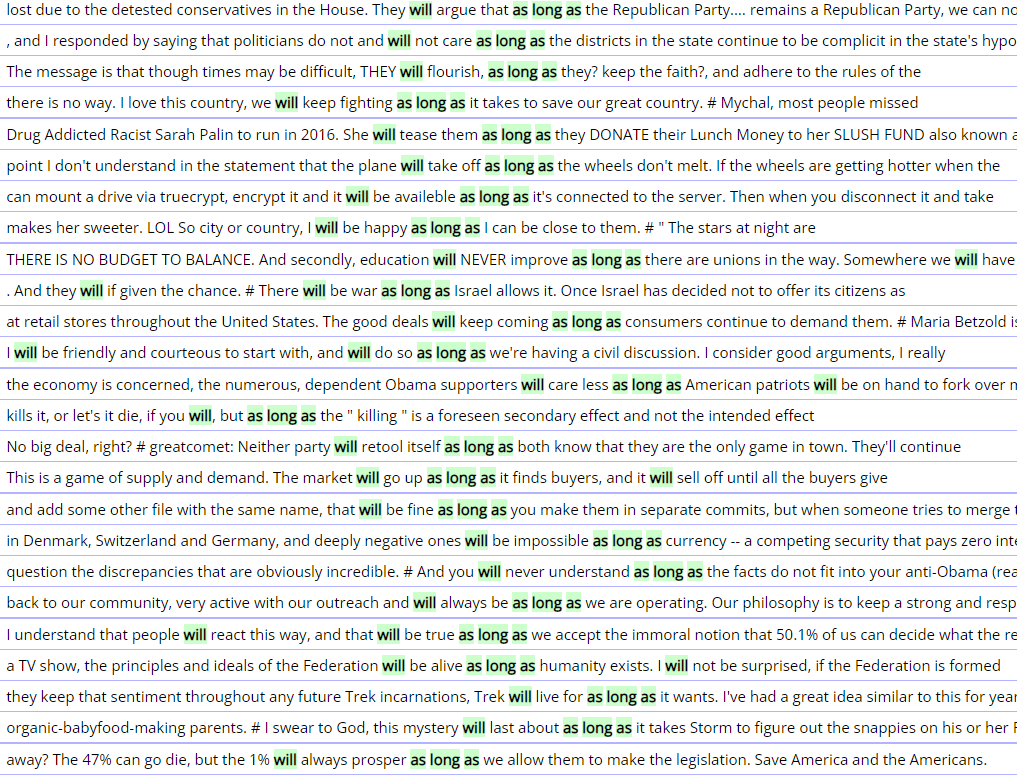 However, in the group of example sentences there are two not listed:

Also, there is a very interesting point in the comments in EGP:

While ‘unless’ is a B1 lexical item in the EVP and taught at B1, its conditional use is not established until B2. Note also that unless is very error prone at B1.

This gives us some insight into the discrepancies between the EVP and EGP.  That possibly the EVP does not consider accuracy as much as the EGP does.

Point 16 in CONJUNCTIONS is defined as:

*‘As if’ and ‘As though’ are already overlapping at two other points.

Point 85 in CLAUSES & subordinated is defined as:

a finite subordinate clause, before or after a main clause, with conjunctions to introduce conditions.

And the conjunctions in the examples are (Unless|provided)_CS

Sadly the English Vocabulary Profile lists ‘as long as’ at B1:

Whereas both EGP points for ‘as long as’ are B2, we do not need to specify much more than that this complex conjunction is used with clauses.  So our first search in ‘as long as’ on iWeb is for general collocates either side.  We soon realise that we will not get clause data.

(This is an acceptable collocate and it appears mostly one word to the left.  Also, note that half of the examples have a comma between them) 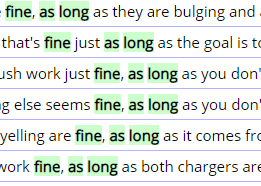 By far ‘will’ and ‘active’ are the most common words either side here too:

DESPITE THE FACT THAT

Despite the fact that your grandmother might have used it as a term of endearment for you, it‘s still a racial slur.

A search for nouns up to 4 to the right of ‘despite the fact that’:

DUE TO THE FACT THAT

Authorities still don’t know exactly how many were murdered

due to the fact that so many of the victims could only be identified by the pieces uncovered at the scene.

Interestingly, the most common collocates 4 sides to the left and right on iWeb are mostly adverbs describing the extent to which something happens.  It suggests a very good way to connect these grammar points as a result.  Extending this subordinating conjunction with adverbs seems very logical.  And because we do have many to choose from as usual either the same level as the grammar or a level lower is the best choice.

Someone has to die in order that the rest of us should value life more.

This is found in a very religious context.

The reason I‘m in town, in case you‘re wondering, is because of a Kansas City Shuffle.

When we check for nouns up to 4 spaces to the right of ‘in case’ we get a real sense of the negative situations that follow it.

However, most of these are ‘in case of an emergency’  which is not the following clause we are looking for.  It is similar for most these phrases.

So if we do a search for verbs as lemmas up to 4 spaces to the right we get: