Here are examples of subject – auxiliary verb inversion replacing the usual ‘if’:

Had I known what was inside, I would have smoked it.

Should you desire, I can provide character references.

Were I allowed to defend myself, I could have proven this to you.

This is another post that points at overlapping points on the English Grammar Profile.  Parts of two points are worded differently but basically locate the same structure for “should” starting a sentence.  The only noticeable difference for these points in succession is that one is labelled as conditional and the other located in a “formal context”.  The reality is that both sets of examples seem to meet those criteria.

Point 110 also directly clashes with a “higher” level of C2 for the same structure which is more of a problem when using the EGP.  Here it is not merely redundant like the differences between 109 and 110, but actually leaves the users wondering what level to give to this “third conditional”.    The clearest example of similarity is the “Had we known…”  The examples at both levels use past perfect and could be considered to imagine how the past may have been different.

INVERTED CONDITIONAL  ‘SHOULD‘  C1   ‘should’ + inverted subject.
Should you require any further information about the program or any other detail please do not hesitate to ask for it.
Should there be a lack of mutual understanding a break-up is unavoidable.

INVERSION subordinated C1  inverted ‘should/had/were’ + subject + verb, in formal contexts.
Should you need any further assistance, do not hesitate to contact me.
Had we known that before we could have taken more money with us.
Were I able to travel to any place and time, I would probably choose the Greece of more than two thousand years ago.

Then there is point 134 in clauses:

INVERTED PAST PERFECT, IMAGINED PAST conditional C2 past perfect + inverted subject, and a modal verb + ‘have’ + ‘-ed’ in the main clause to talk about imagined situations in the past.
Had he been more experienced he would have known that these things always happen in this part of the world.
Had we known this fact we would have organised more activities within school hours.
Had we learnt from the mistakes of the past, we would have given up fighting each other a long time ago.
Had I known so many people from abroad were coming to visit our stand, I would have studied harder during my private lessons in the past.
Had this file fallen into enemy hands, it might have had disastrous effects on the Western world.
Had public transportation been an option I would have chosen that instead of my car.

However, what we would expect to find is the usual “would have + past participle”, but in actual fact what we mostly get is a clause before it without a relative pronoun: 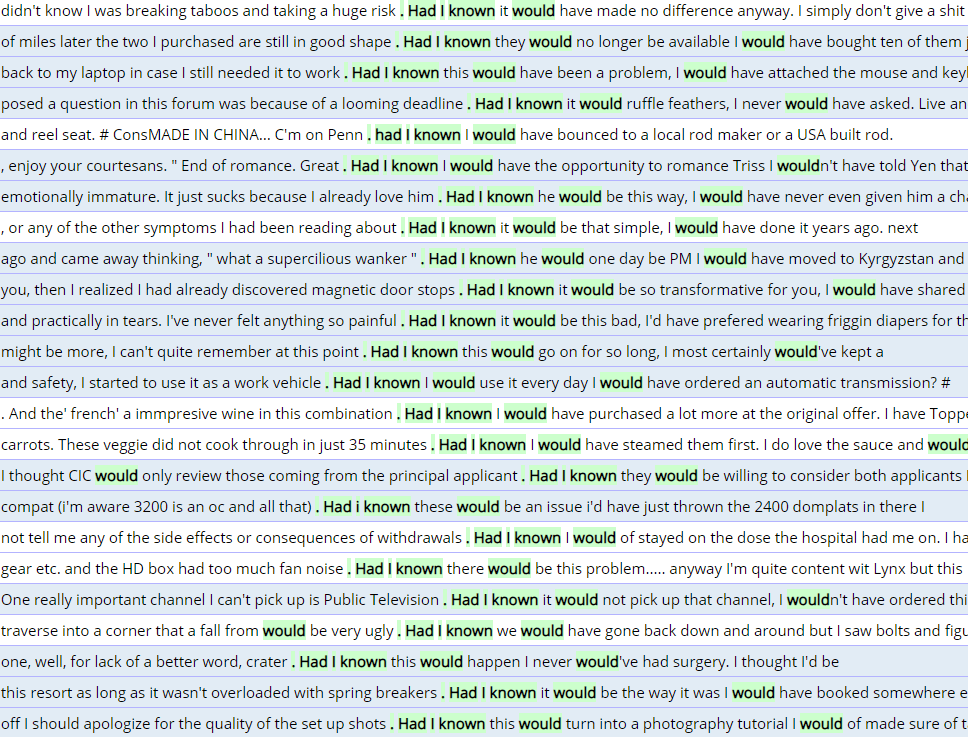 It should be remembered though that these are not necessarily inversion, but could be the start of questions starts. Still, we can get an idea of how frequent the “Had I known” Ngram is.

Inverted subjunctive ‘were’ is very rare or too hard to locate in corpora.  The best we can do in iWeb is:

HARDLY HAD + inversion C2 FOCUS | FORMAL | happened immediately before something else...

past perfect simple (inversion) In the English Grammar Profile, C1 point 85 in the category of...

WERE + noun phrase + TO infinitive C2 INTRODUCE A CONDITION in a formal context 'Were' +...

NEVER BEFORE + perfect inversion ‘never + inversion‘ is B2 with or without past perfect. ...

if + PAST PERFECT + MODAL VERBS C1 point 112 in CLAUSES/conditional is defined as: Conditional subordinate...

NOT ONLY + present perfect continuous (inversion) + BUT Adverb expressions such as ‘not only’, ‘not just’, and ‘not...

(conditional) inverted SHOULD + WOULD clause In the English Grammar Profile, C2 point 120 in the category of...

if you should C1 points: 114 in CLAUSES/conditional is defined as: subordinate conditional...

BUT FOR (third conditional) C1: formal past conditionals | noun phrase, ‘would have’ clause...

WERE IT NOT FOR ‘were it not for’ + noun phrase expresses that someone...

NON-FINITE past participle CLAUSES In the English Grammar Profile, C1 point 7 in the...

if it were to INFINITIVE C2 CLAUSE: introduce conditions in formal contexts 'If it were'...

ONLY IF + inverted conditional On Pearson’s scale at GSE 71 B2+ describe present or...

WHETHER * OR NOT (conditional clause) C2: it is not important which possibility is true...

Hardly had + inversion If you want to express something that happened immediately before...

Never + inversion ‘Never have I…’ A rarer grammar structure to do with adverbs, negation and...

IF IT WERE NOT FOR In the English Grammar Profile, C2 point 125 in CLAUSES/conditional is...