The following type of grammar makes it very clear just how hard it is for a complexity checker to identify infinite possibilities of noun phrases and clauses.

Point 98 in the category of CLAUSES that are subordinated is defined as:

a non-finite clause, introduced by ‘-ing’ before the main clause, to give more information.

Since we have a large choice, Vocabulary at B1, a level lower than the B2 grammar point is our first choice for expanding the grammar structure.  Yet, what we found is that finding patterns matching the grammar was rare at higher-level vocabulary.  Therefore we returned to the most common words.  And when staying with these it was clear that there are just too many patterns to be able to identify all of them.

When examining the context of 100 random concordance lines from ‘. Using’ it was clear that only half of them would locate this -ing subordinate form for our B2 grammar.  Most of the rest were all gerund subjects.  Here is a list of some of those that are B2 as a subordinate clause, and in bold is the subject-verb we need to differentiate it. (We have shortened some incomplete sentences)

Using Intensity Factor (IF), an athlete can set the right wattage range.

Using this number you can do some simple math.

*The lack of a comma makes this harder to catch!

Using this technique, only the changes between frames are actually encoded.
Using this method, an optimal dictionary is constructed before any encoding is actually performed.
Using Sociota you can manage any number of social media profiles.
Using Sociota you can schedule your posts to any number of accounts and monitor them simultaneously.
Using thin-ended pliers, squeeze the ring to remove it.
Using the on-board microphone and controls, you have the ability to dial calls by voice.
Using a large knife, carefully scrape over mixture at a 45- angle.

Using these settings, the Avid exports an AAF file.
Using the papers in hand, he checks the proof.
Using the level concept art drawn by Ohshima as inspiration, Nakamura treated the score.
Using this Web-based solution, you can submit directly to Health Net on-line.
Using these examples, you’ll see how you can use the following tools.
Using the DJI Pilot app I was able to switch to ” free ” mode.

Using your parent access, the system will populate many of the required name and address…
Using this context, create a DStream which reads message from a Topic.
Using a range of paint media, students will develop their painting skills, while subjects…
Using a scenario based around shared energy use in the home they found that when energy…
Using these features, team members are more likely to track their work and stay in…
Using the Eastern Healing Arts, Ben provides a balance between the individual desires of his…

*sadly checking some of these examples are very rare clusters.  The best example probably is: 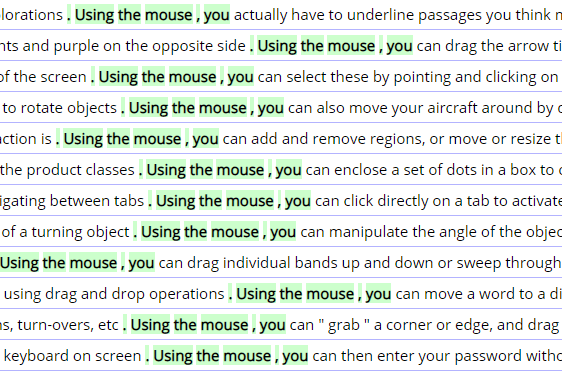 *rare structure but B2 grammar.

(the example below come from a search for ‘. following –verb , _p‘)

(the examples below come from a search for ‘. following –verb , _p‘)

A further search for collocates to the right:

*However, these still are not the grammar we require, since many of them are simply gerund subjects followed by a verb in the first clause.  For this reason, another way to search is required.  We can follow the patterns from the EGP examples as a start but it should be remembered this is not ideal,  just a sure-fire way to find the grammar structure.

*Sadly these structures are not allowed on the corpora.  There are too many possibilities for it.  So we need to return to our previous found gerunds as a starting point.  And even after can try appending the B1 vocabulary in the place of verbing.  The results are still so rare.  Therefore we can only return to the most common vocabulary.

I’m looking for a TESOL position