Here’s an expert example of using ‘their’ with a general reference:

It‘s based on the idea that people learn best when they are actively involved in their education.

The use of ‘their’ is confusing to give level to, because there is differing information between the English Vocabulary and Grammar Profiles, and secondly the uses are hard to locate in corpora automatically.

At B2, Point 58 in the category of DETERMINERS & possessive is defined as:

Everyone has their own story, and it’s important for you to tell your own story, even to yourself.

They were having the time of their lives.  They filmed the artists and their work.

You‘ve never raised your voice at them in all their lives.

The Scarlet and the Black

Locally, Long Beach fire and police officials have been unsuccessful in their attempts to find the cause in last night‘s explosion aboard the Japanese freighter Suma Maru.

However, in the EVP ‘their’ is:

So formally we can investigate for indefinite pronouns to the left of ‘their’.  But first, we can check which _pn1 might work. 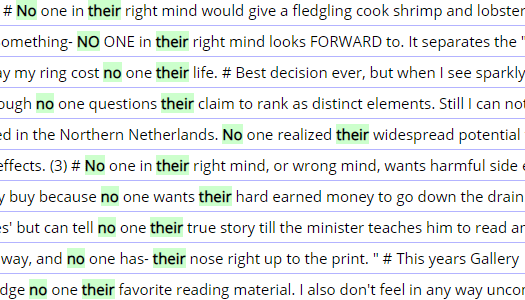 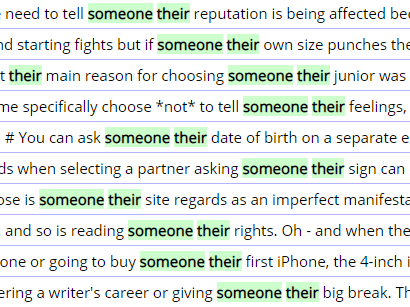 When we do a collocate search up to 4 to the right, every example was together on iWeb. 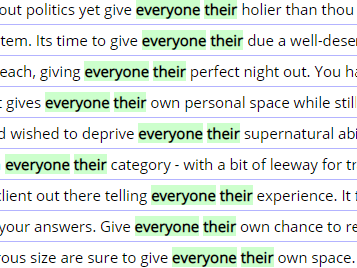 Does that qualify as a singular subject?

1 thought on “their (GENERIC)”

HALF | ENOUGH + OF + determiner In the English Grammar Profile, B1 Point 37 in the category...

noun + OF + MINE | YOURS Here is another example of overlapping grammar points in the...

irregular plural noun + ‘s + noun In the English Grammar Profile, B1 point 44 in the category of...

millions | loads | tons + of (hyperbole) Here are some examples of how quantifying determiners can be...

indefinite pronouns (negative context) In the English Grammar Profile, there are a few grammar...

one (pronoun) This post lists two clashing points in the English Grammar...

yours (subject) Point 57 in the category of PRONOUNS/possessive is defined as:...

ANOTHER ‘Another‘ is listed at A2 in the English Vocabulary Profile...

this + NOUN PHRASE + of + POSSESSIVE PRONOUN C2 highlight something, often in a positive way with demonstrative...

HERS | THEIRS (subject) Point 111 in PRONOUNS: the possessive pronoun ‘hers’ with singular...

whose relative clause What vocabulary should be learnt with 'whose'?...

determiner + adjective + ONES In the English Grammar Profile, B1 point 40 in the...

degree adverb + indefinite pronoun ‘ABSOLUTELY NOTHING’ It is very hard to distinguish between levels for some...

OURS In the EGP, there are several points in the category...

SOMETHING | NOBODY + singular verb Here’s an example of indefinite pronouns as subjects in two...

‘either’ | ‘neither’ + singular noun At B1 in the English Vocabulary Profile, ‘either’ is listed...

BE + adjective + TO-infinitive B2 MODALITY: She is unlikely to get a job....

THEIRS (object) Point 97 in PRONOUNS is defined as: possessive ‘THEIRS’ with...