When ESL teachers look at student texts they often intuitively notice like all native speakers of a language that which is inaccurate.  Yet, B1 is the level that most General English students are in and are also taking on most of the new language and also making most the errors.  It is easy to mark red over a paper because it requires no thought.  Marking the complexity of language is something which is not intuitive in my opinion.  It requires knowledge of what students can do at various levels while they are progressing through levels.  And as far as empirical research goes, nothing comes close to the English Profile for that information.  No teacher has time to check through the EGP or EVP either or to somehow summarise all the information in it to mark a handful of texts.  That is why the ‘complexity checker’ on this website was created.  A quick way to find something positive to highlight in student’s work (among other uses).

One of the really useful things with the complexity checker is the ability to turn off various highlights.  The buttons below the text allow us to quickly locate stand out features.  Here I was interested in the academic vocabulary: 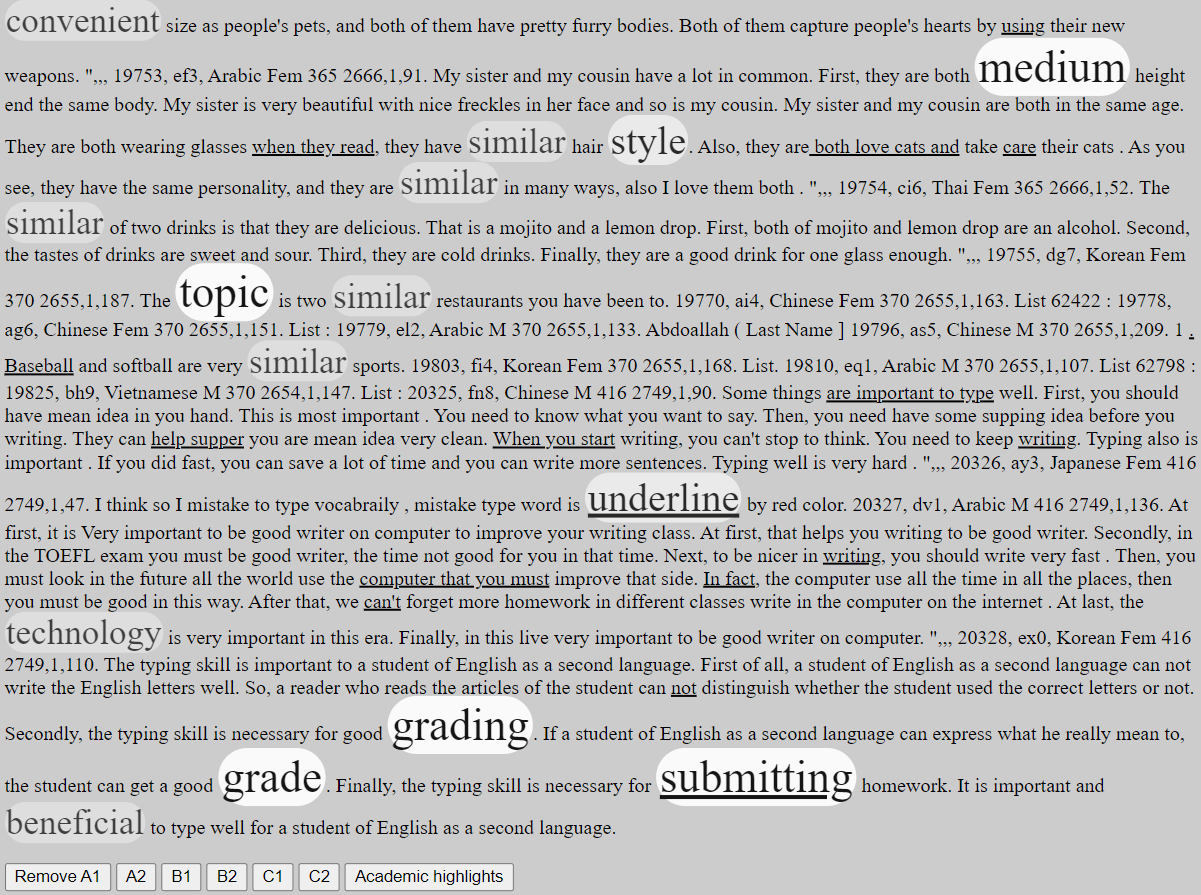 Similarly, we can very quickly locate C level grammar (generally longer lines) or C level vocabulary (usually just small spots) in this 100,000-token B1 corpus by zooming out in our browser, and since the highlights also get larger the higher the level, they stand out, making it easy to find areas to focus in on.  Also, the black lines are links that go to detailed information about grammar points.  (not all grammar has been linked yet = work in progress)

Here are some C level points that were noticed in this B1 student writing:

Those poor people work so hard for less money, and some of them ask [for] the money from the people in the street.

The final thing that contributed to my success was I practiced many times.

The final thing that contributed to my success at Latin dancing was that I had a good teacher.

*These complex transition signals are often learnt at pre-intermediate and it is quite clear that this is a long chunk of language being used by different students.  From my own experience with students at B1, this structure is usually full of errors.

The important point was that at least two people had discussed the same thing.

The funniest thing is that he looks like he  [does] not have a chin.

And, Action movies had me imagine.

And,  action movies had me imagine fantastic people.

*Notice the versions.  It would be great to know what prompted the correction.  Also, I am not totally convinced with the formality or choice of grammar, when ‘make me imagine’ sounds more natural. Also, the whole paragraph doesn’t make it clear why it is written in the past tense.

It is not difficult to get ingredients of ddukboggi.

They have [a] modern city with all services, but you can see the poor every[]where, for example[,] you can see children work in the street and they don’t go to school.

*Below is a large concentration of advanced language:

Even in the burning hot summer, some of them have spicy hot pot…

Just depending on one person can’t win the game.

The graph indicates that they were almost exactly the same in 2004.

In Korea about 100 years ago, the country was quite undeveloped compared with nowadays.

Finally, it is almost impossible to write a perfect paragraph on the first draft.

All in all, I have a very busy plan for the weekend.

All things considered, I will choose the Sony VAIO notebook.

Added to that, ddukboggi has an effect  [that prevents obesity.]

In the following snippet, ‘based on’ is almost used twice.  The problem is that there is some confusion with punctuation and word order to really say that a non-finite subordinate clause has been used to introduce the main clause successfully.

Moreover, you should join a lot of extra activities because you might not only have a chance to make  friends but you will [also] experience American culture.

My room is on the fifth floor, [on the] East side so I always get not only warmth in the morning with sunshine but also freshness with a forest on [a] hill