The adjective ‘able‘ means that the subject has:

the power, skill, means, or opportunity to do something.

Let’s look at example sentences of the most common but ‘stand-out‘ infinitives following BE + ABLE TO infinitive modal structure:

We should be able to access every file from here.

Listen to this B2 example

10 BE ABLE TO PROVIDE

So, in other words, I would be able to provide for her using her assets?

listen to this C2 example

Kotaku Australia
Digimon Adventure Teased Its Big Bad by Establishing a Wild New Canon
... viewers will be able to keep up with its brisk pace and dense dumps of information.
*keep up = b1

Mirage News
Police treating house fire as suspicious in Ringwood East
Four people were able to get out of the home without injury. The fire is being treated as suspicious and an investigation into the circumstances …

According to the COLLINS dictionary, the past participle verb ‘allowed’ is B1:

If someone is allowed to do something, it is all right for them to do it and they will not get into trouble.

We’re not allowed to bring mobile phones too.

This is clearly another post about overlapping grammar points in the English Grammar Profile.

‘BE ALLOWED TO’, PERMISSION

B1 point 99 in Modality and expressions with be is defined as:

a limited range of expressions with ‘be’ + infinitive (‘be allowed to’, ‘be supposed to’, ‘be able to’) with present and past forms of ‘be’ and with modal ‘will’

‘Supposed’ overlaps in B2 also.

There is also some overlap with 106 in Modality ‘Plan’.

*This is where the English Grammar Profile makes it hard to use.  When you read the description: ‘be able to’ with modal ‘will’ from above you think that is all you need.  But actually  ‘will be able to’ is also found at A2: 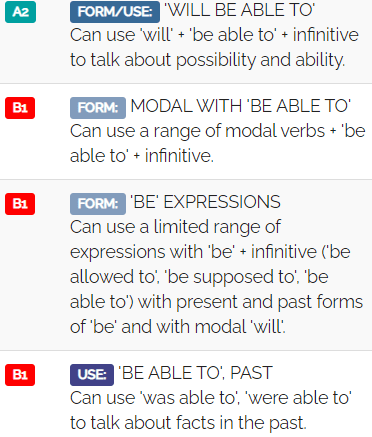 *The above search was for this code on iWeb corpus: _vb supposed|able|allowed to _vv

we realize that ‘able‘ drowns the rest out.

TO HAVE TO Point 117 in the category of MODALITY is defined: ‘have...

adjective + FOR + object + TO-infinitive B1 MODALITY: It's hard for me to imagine....

BE + adjective + TO-infinitive B2 MODALITY: She is unlikely to get a job....

BE + supposed + to INFINITIVE The B1 / B2 divide seems to have many clashing...

Verb + TO-infinitive (range) This is another grammar post that is better dealt with...

may not In the English Grammar Profile, B1 point 94 in the...

might not + bare infinitive You guys might not know this = B1 MODALITY NEGATIVE. In the English Grammar...

adjective + NOT TO + infinitive (be careful not to disturb them) C2 in the English Grammar Profile, point 230 in the...

CAN + limited range of adverbs In the English Grammar Profile, B1 point 120 in the category of...

the best NOUN to VERB In the English Grammar Profile, B1 point 35 in the category...

VERB + DIRECT OBJECT + to INFINITIVE This post contains an example of overlapping B1 grammar points...

(not) too + ADJECTIVE | ADVERB + to INFINITIVE B1: CLAUSES | comparatives In the English Grammar Profile, point 68...

adjective + TO infinitive + THAT clause B2: SAFE TO SAY THAT | IMPORTANT TO REMEMBER THAT...

should Here’s a student example of using ‘should’ with explanations: Finally, I think people should...

questions with modal verbs Let’s start with A1 grammar to explain how to form...

verb + adverb + adjective + TO infinitive B1: IT IS ALSO IMPORTANT TO NOTE | WAS PLEASANTLY...

necessary to INFINITIVE In this grammar research post, we have collected all the...

welcome + to-INFINITIVE In the English Vocabulary Profile, be welcome to do sth...