In the English Grammar Profile, B2 point 56 in the category of DETERMINERS and articles is defined as

to talk about one thing that is affected by another.

The broader the sentiment across business, the more influence and power there is to make change.

The more guns there are here, the more likely there is to be a misunderstanding.

The more members of your party who vote, the more likely you are to win an election.

The more pressure you‘re under, the harder it gets.

The less you know, the better off you are.

The stronger the issues, the more powerful the catharsis.

The tighter the pack, the stronger the wolf.

Unfortunately, iWeb does not allow a search for ‘the more * * * *’ because there are so many.  But it does allow us to look for lemmas for ‘less’.  What we find is that ‘likely’ is very commonly followed by a pronoun and BE. Also, note that ‘less’ or ‘more likely‘ is B2 modifying modality.

The longer you wait to begin the less likely you are to find it at all. 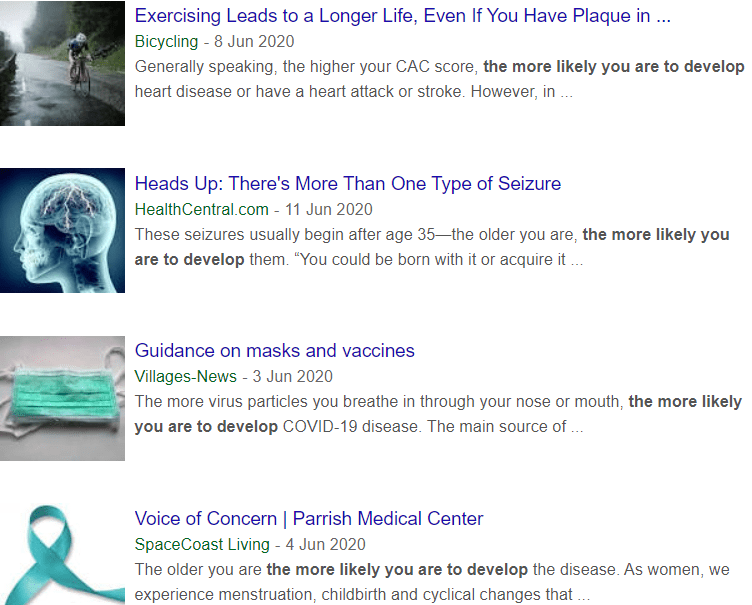 *Looking at clusters to the right, we realise this is common as a description ie ‘the lower part of the screen‘.

A check for comparative collocates up to 4 spaces to the right:

HIGHER (but the structure found does not match) 1551

BETTER (there are hundreds of examples with nothing between, 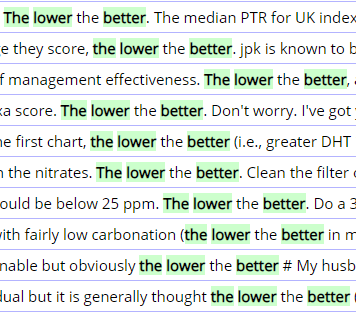 This requires that we manually look through clusters:

THE LOWER THE VALUE, THE

THE LOWER THE SCORE, THE

THE LOWER THE RATIO, THE

THE LOWER THE TEMPERATURE, THE

THE BETTER OFF YOU WILL BE

*’score’ and ‘value’ are common between ‘lower’ and ‘higher’ collocates.

THE HIGHER YOU GO, THE (*here we have a clause) 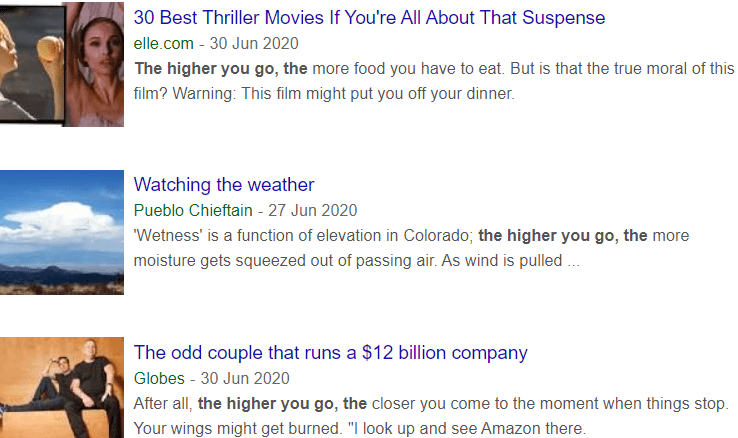 comparative non-finite clause B2 COMPARATIVE ADJECTIVE + 'THAN' + NON-FINITE CLAUSE 'than' +...

verb + A LOT + comparative adjective | adverb B2 modify and intensify comparative ADJECTIVES with 'a lot'. used...

comparative AND comparative In the English Grammar Profile, B1 point 47 in Adjectives is defined...

comparative adjective + THAN + verb-ING CHEAPER THAN BUYING | BETTER THAN GETTING | EASIER THAN...

MORE * THAN (complex comparisions) A simple comparison in English is “She is more important...

a (little) bit + COMPARATIVE Point 50 at B1 in the English Grammar Profile in...

to-infinitive + noun phrase + comparative In the English Vocabulary Profile at B2: to make matters...

advanced phrases with ‘THE’ You might know how 'the' is used as an article....

adverb comparative phrase ‘more frequently than’ ‘more rapidly‘ is an example of an adverb phrase.  In...

NO | NOT ANY + comparative Let’s look at an expert example of limiting comparison: Now, these people are no...

comparative + hers | ours Point 76 in the category of PRONOUNS is defined as:...

much + comparative adjective + noun How to extend comparatives for intermediate students...

GET + comparative In the English Vocabulary Profile, listed at B1 is: get...

(slightly | a bit | much) + COMPARATIVE At A2 in the Oxford Learner’s Dictionary: a bit [singular]...

RATHER THAN + non-finite clause | phrase Let’s look at how ‘rather than‘ is used to compare. ...

What a + NOUN PHRASE Exclamative ‘what’ can precede the indefinite article and is, therefore,...